“To juxtapose, is to find the right fit” says Jeff Rice, author of The Rhetoric of Cool: Composition Studies and New Media. In his chapter regarding the art of juxtaposition, Rice discusses this style of writing or composition, as being native to deejay (DJ) and digital visual culture. A DJ or video artist will create new compositions, by juxtaposing appropriated ideas, images, and music through a thematic filter. Within my exploration of intersectional identities, I am interested in exploring a concept of remixing as a process of identity construction and image appropriation as a mental and physical process. I am particularly interested in the specificities of intentional genderqueer “passing”; the ability to be recognized by society at-large as male, female or neither, and the opportunities for freedom created by such a fluid, irreverent stance. By image sampling, physical cutting & pasting, and mental cueing, queer and trans people remix their bodies, turning everyday interactions into a creative act. These everyday creative acts can be particularly pungent for gender non-conforming people of color, as the addition of race adds a layer of complexity and surveillence.

Certainly all people go through a process of identity construction as they age. We each have various influences that make up who we are as individuals which factor into who we ultimately become. But should an individual inhabit a “body of dissent”, then the act of juxtaposition will take on added meaning, responsibility, and power. Genderqueer people juxtapose their bodies as an act of “disidentification”, a term coined by performance studies theorist, Jose Esteban Munoz. Disidentification has many uses. For the queer person of color, it is a mode of existence, an act of rebellion, an alternative discourse, a survival method, and an artistic practice.

As a mode of existence and act of rebellion, Munoz tells us “Disidentification is meant to be descriptive of the survival strategies the minority subject practices in order to negotiate a phobic majoritarian public sphere that continuously elides or punishes the existence of subjects who do not conform to the phantasm of normative citizenship.” (4) As a genderqueer person of color, this concept is very relevant to my daily experiences as I slide in and out of various public spaces. My choice to remove my breasts and flaunt my facial hair is in direct conflict with what it means to be female. My choice to continue using female pronouns despite passing as male, ruffles the hair of some LGBT community members. Passing as a man sometimes means playing up hyper masculine traits to avoid being called a faggot. And passing as a black man occasionally means being monitored. Fluidity in embodiment, and in practice.

Invisible is an artful self-produced documentary video of FTM Youtube vlogger called “Laidbaqq”. In it, he stands in front of the camera defiantly, covering his breasts with his hands as he addresses the audience about his frustration with the expectations put upon him by mainstream society regarding masculine identity and performance. While he doesn’t address the issue of race in this piece, putting his body on display and declaring a trans identity (as opposed to a male identity) on one of the most visible and dangerous websites in the world is an incredibly brave act of disidentification. Munoz references queer theorist David Halperin in his explanation of a mode of identity construction. “To practice a stylistics of the self ultimately means to cultivate that part of oneself that leads beyond oneself, that transcends oneself: it is to elaborate the strategic possibilities of what is the most impersonal dimension of personal life – namely, the capacity to ‘realize oneself’ by becoming other than what one is.” (178) This potentiality, this ability to transform oneself is a wonderful description of how it feels to… come of age, so to speak. To come out. Three times. First as a lesbian. Then as queer. Then, as trans. Every layer of guilt, embarrassment and fear begins to fall away as you allow yourself to be exactly where you are.

My final point of interest is Munoz’s reference to the use of objects within disidentificatory practices. He says, “Disidentification for the minority subject is a mode of recycling or re-forming an object that has already been invested with powerful energy.” (39) In remixing the body, disidentificatory actions take place. Viewing videos like Invisible on FTM Youtube communities, or attending an Original Plumbing Magazine party, provides a trans questioning person with many visual references of transness. These images are appropriated and sampled and are used to begin a reconstruction of the mind and body. If one chooses to enlist medical intervention, a cut and paste action occurs, with the removal of unwanted body parts and the addition of hormone replacement therapy to increase one’s ability to pass. Here, the body is the object that is being recycled and re-formed, or remixed; these juxtapositions form a new composition or a new body for the trans or genderqueer individual. The inherent fluidity of transitioning can be likened to the improvisational nature of a live DJ performance. The DJ might build a set list on the fly, based on the energy they are receiving from the crowd at any given moment, just as a gender variant person might react to a person in a public setting based on the threat level they feel in that moment. And like the DJ (“bag of tricks”), a gender variant person will have a toolbox available to help them navigate various spaces. And occasionally, we get lucky (my Tweet from 2 days ago)… 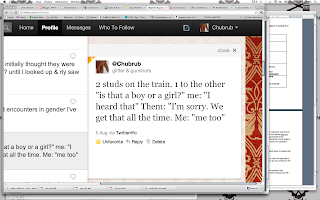